From the traffic outside, to the barking dog next door, to what sounds like a heard of elephants in the apartment upstairs, noise is all around us even when we’re in the supposed sanctuary of our own home. It doesn’t have to be that way. There are acoustic testing standards, guidelines, and regulations intended to make our world quieter. The basic test standards (STC and IIC) that we commonly use for apartments and condos have been around since the 1960’s, yet they are still often misunderstood and misused. In this blog post, we’ll review the first two basic acoustic test standards that apply to apartments and condos: STC and IIC.

Before getting into the first two standards and ratings themselves, here’s a quick overview of some basic sound concepts and how they relate to housing. When we talk about typical sounds in apartments, we can generally lump them into two categories: airborne sound and structure-borne sound.

BASIC CATEGORIES OF SOUND IN BUILDINGS:
1.)    AIRBORNE SOUND
Airborne sound encompasses sounds that begin in the air, things like TVs, stereos, barking dogs, people talking, and yelling kids.
2.)    STRUCTURE-BORNE SOUND
Structure-borne sounds are those that start in the building structure, things like footsteps, dropped objects, cabinet door slams, and rolling objects (vacuum, suitcase, etc.).
Ultimately, both types of sound travel through the air when they’re transmitted from a building surface (wall, ceiling, floor) to our ears, but it’s where they start that we use to make the distinction.

It’s important to understand the distinction between airborne and structure-borne sound, because the distinctions between the two determine which standards and guidelines apply,  which noise control measures make a difference, and which don’t. The first two acoustic test standards we’ll discuss are STC and IIC.

IIC (Measures Structure-Borne Sound Isolation)
IIC stands for Impact Insulation Class, and it measures the level of structure-borne sound isolation between two spaces. The test method is detailed and specific in an effort to produce reliable results and can be found in the ASTM E492 test standard. Here is an overview:

To conduct an IIC test, the following steps should be taken.
1.    Construct the assembly to be tested in the opening between the source (impact side) and receiving (listening side) rooms of the test lab
2.    Tap on the floor using a standardized tapping machine
3.    Measure the sound levels in the receiving room
4.    Use the measured sound levels to calculate the IIC rating using a special procedure 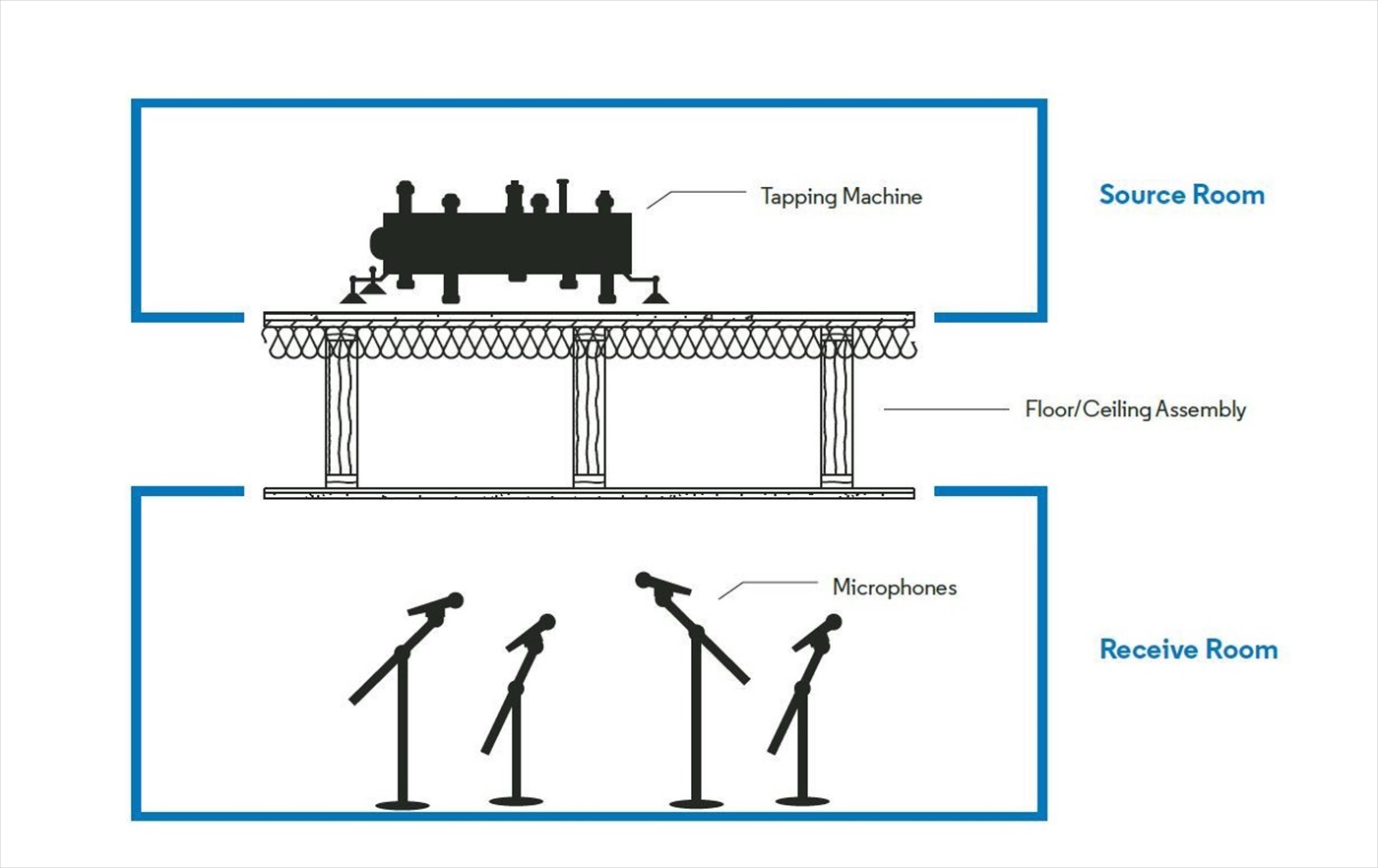 It is important to note that the “assembly” in Step 1 is the entire structure that is between two rooms. For instance, when we test a “floor-ceiling assembly” that would separate an apartment above from an apartment below, we construct the entire floor structure like the examples below. 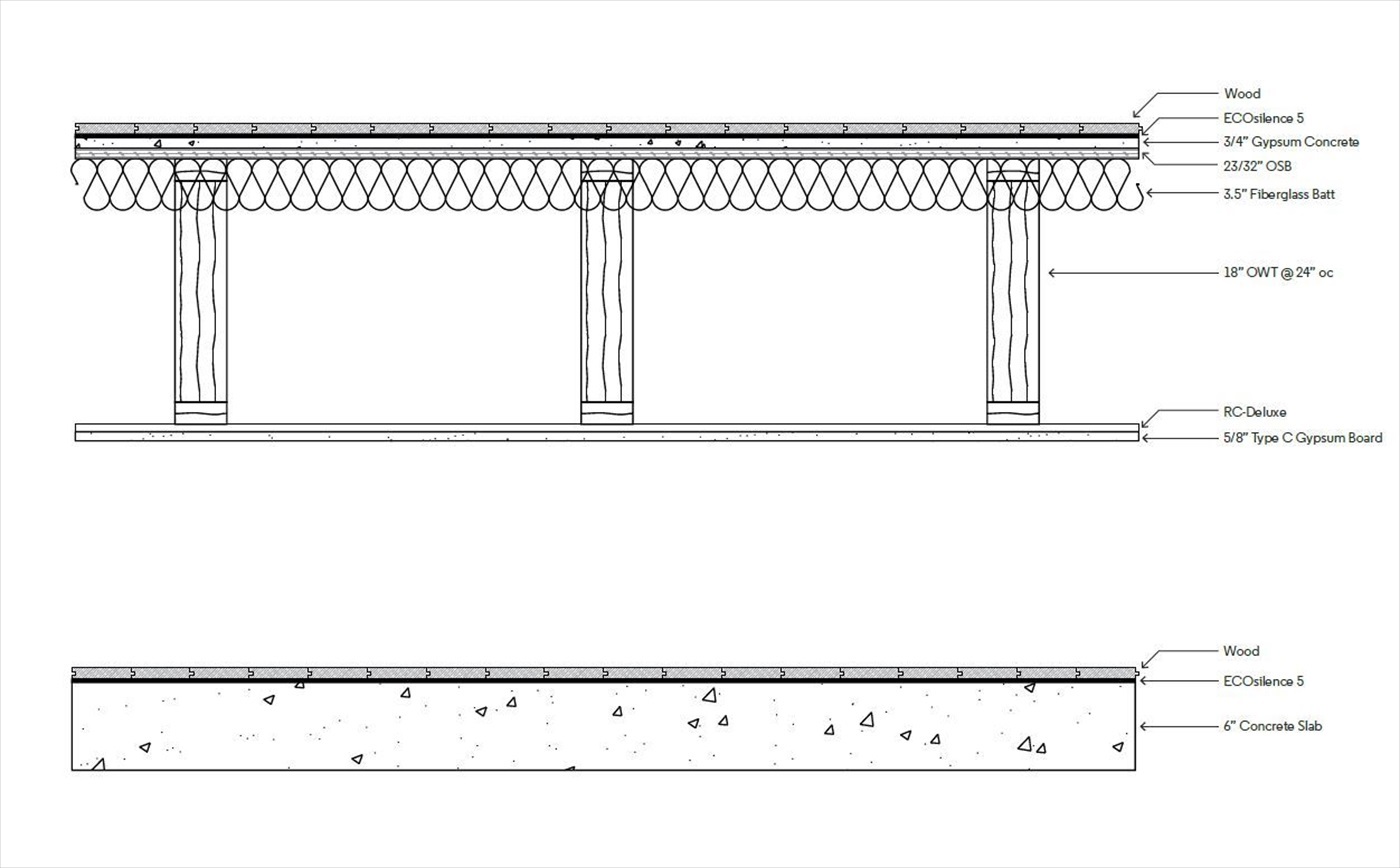 All of the details in the assembly affect the results of the test and changing one element can have a huge effect on the overall IIC rating for the assembly.

Examples of IIC ratings for some common assemblies with and without acoustic isolation at the floor and ceiling are shown below. 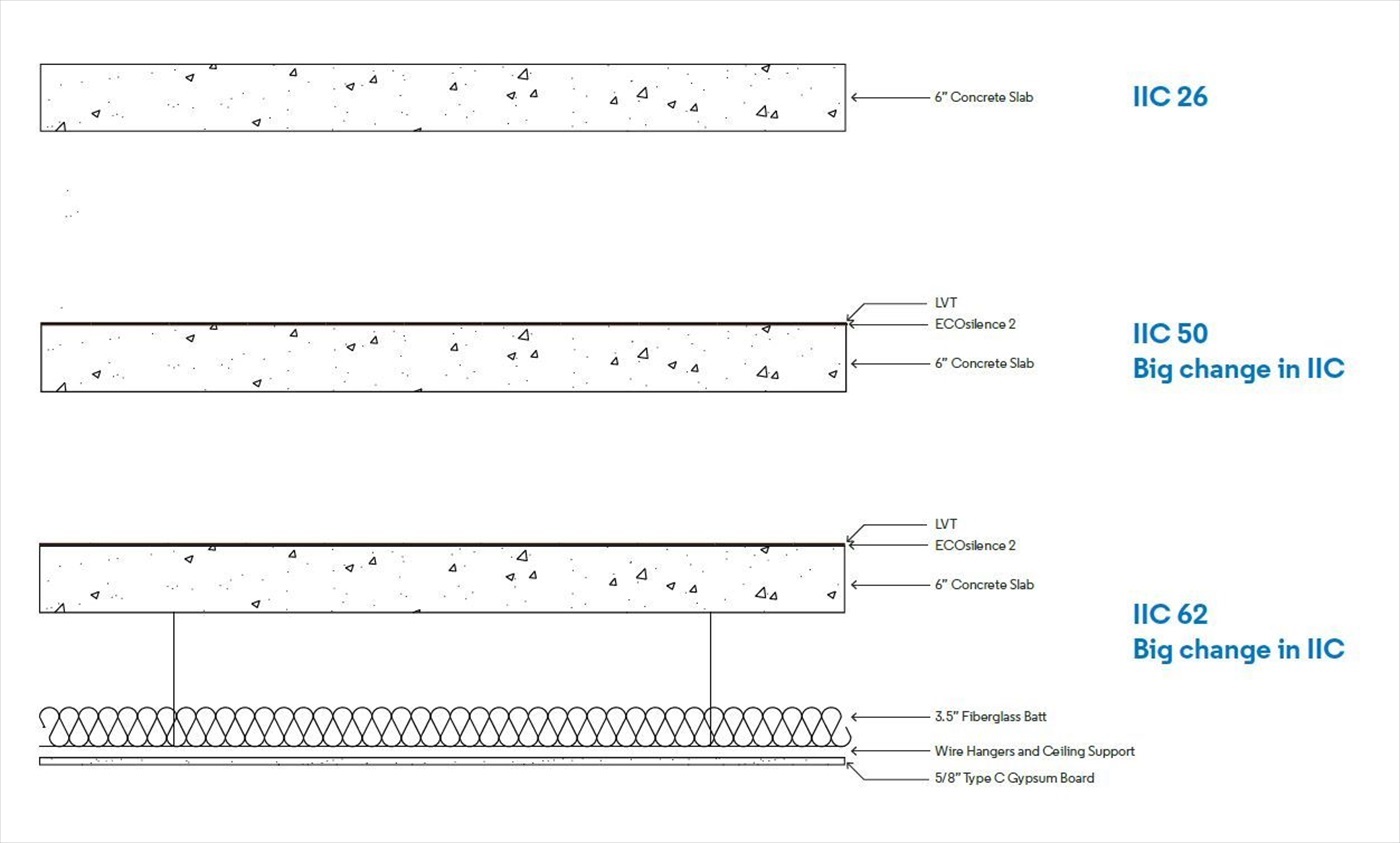 At Ecore, we’re often asked what the IIC rating is for one of our underlayments; but from the images above, it’s clear that the same flooring and underlayment can have widely varying IIC ratings depending on the rest of the structure. As an analogy, trying to give a single IIC rating to an underlayment is like saying I’m just as fast as Usain Bolt because I’m wearing the same shoes.

STC stands for Sound Transmission Class, and it measures the level of airborne sound isolation between two spaces. The test method is detailed and specific in an effort to produce reliable results. Details are in the ASTM E90 test standard, but a brief overview is below. 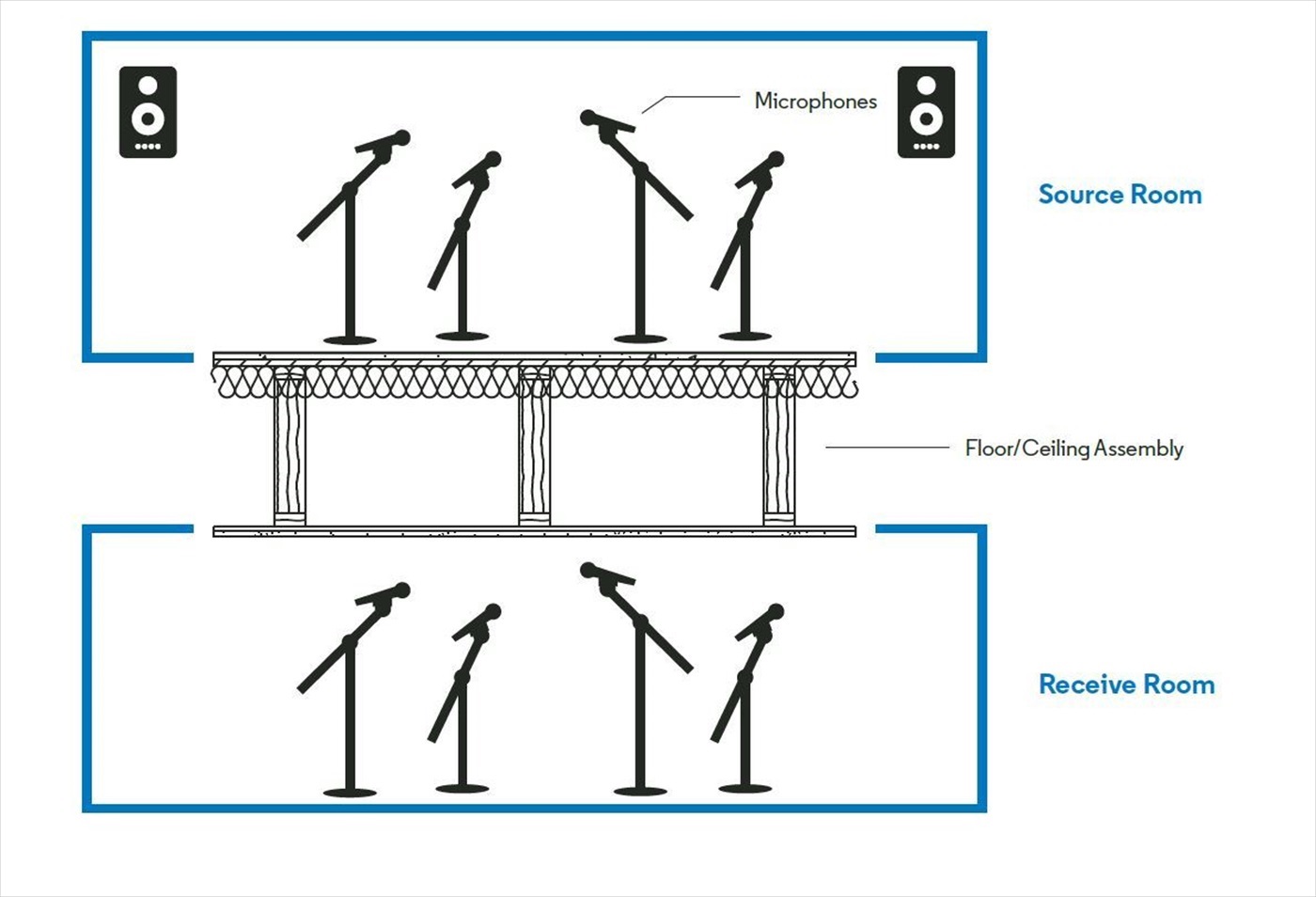 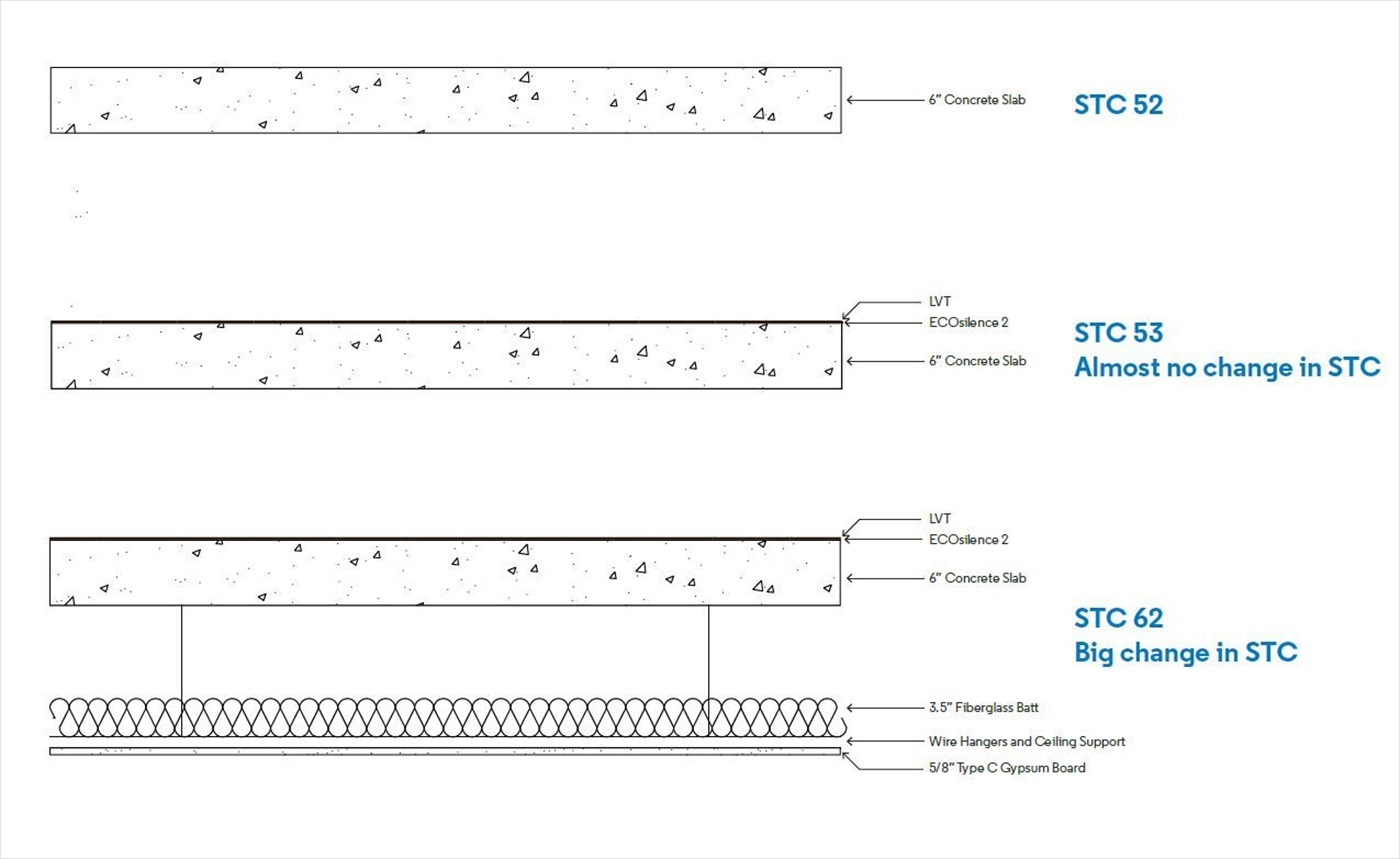 SUMMARY
STC and IIC are the ratings most commonly used to specify and evaluate the level of sound isolation between spaces. In particular, STC and IIC ratings are included in the building code requirements for multi-family housing such as condos and apartments. Both ratings depend on the details of the floor/ceiling assembly being considered, things like the assembly’s mass, stiffness, and the presence of acoustic isolation. The IIC can be affected significantly by changes in flooring and underlayment, but STC ratings typically aren’t affected by flooring and underlayments.

When selecting flooring and underlayment for your particular assembly it is important to consider all the details of the assembly and to get acoustical test data for an assembly as close as possible to yours. Be wary of flooring and underlayments that publish ratings without any details of how they were tested. Remember, you will never be as fast as Usain Bolt just because you are wearing his shoes, and your assembly won’t be assured to get an IIC 70 just because you use an underlayment that tested that high on some unknown assembly.